Hope Thru Soap on CNN

(CNN)Every weekend, Jason Winter hooks his shiny aluminum 12-foot long trailer to the back of his SUV and heads to metro Atlanta, where he provides homeless people with a sanitary and private space to bathe. The unit is furnished with a shower, a toilet, hot water, heat and air conditioning, but more importantly, it comes equipped with hope.

Throughout his life, the 41-year-old account manager has come across men and women in poverty-stricken areas covered in grime, lacking basic human needs like clean water and clothing."If I saw a homeless person in the street I would always try to have some kind of interaction with them," he said. "No one asks to be homeless, so if I could help them in any way, I did."In 2016, Winter's fervor to help turned into a free-service program called "Hope Thru Soap." It offers an alternative to homeless shelters' jam-packed lavatories. His nonprofit, with a healthy social media following, has a simple mission: to offer "showers and love to those in need." 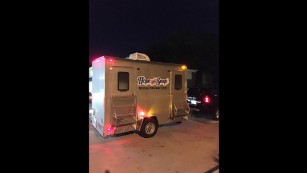 The mobile unit comes with a shower, a toilet, hot water, heat and air conditioning.One "Hope Thru Soap" user, Nathan, lost his home recently and found the mobile unit while walking through a park. He hadn't showered in three days."I am really feeling refreshed and I thank God for [Jason] for bringing this shower to us," he said in a Facebook post. "So much dirt came off of me.""Something as small as a shower gives them hope," said Winter. "When you're clean you're less likely to want to sleep under a bridge. A shower might make them want to get out and find work."Free baths require a water supply and toiletries. Until now, Winter has scraped funds out of his own pocket to pay for it.He is trying to raise $10,000 for supplies and a fire hydrant meter, which would allow him unlimited water from any hydrant in the city."It's a great feeling to help these people but I don't do it for myself," said Winter. "I do it for the folks that can't speak for themselves and don't really have hope left. We bring them hope."
51 views0 comments

Grant Awarded by Central Congregational United Church of Christ for 2019!